Dave Morin and the Future of the Internet

One of the great benefits of being a student is the wide variety of people you get to interact with. In particular, universities go to great lengths to get empowering graduation speakers at their commencement ceremonies. Harvard, for example, has had many powerful speakers including Madeleine Albright, Bill Gates, and (perhaps the most influential) J.K. Rowling. My institution, or as of last Friday alma mater, The University of Colorado, does not have as much money to spend on graduation speakers. The primary commencements ceremony had the founder and CEO of Chipotle, a burrito joint - needless to say, I did not attend that event. The economics department had a much more interesting speaker: Dave Morin, a co-developer of Facebook, and entrepreneur. Currently, he is developing his own creation, Path, a social network devoted to your closest friends. 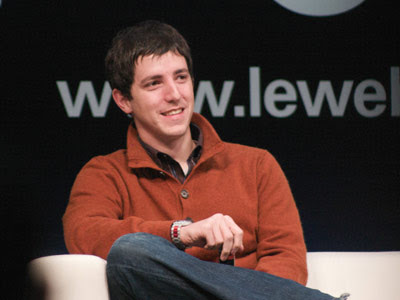 Students were invited to a more private conversation with Mr. Morin the day before graduation which I was fortunate enough to attend. His conversation was very intriguing from both an economic and investment point-of-view.


Entrepreneurs
One of the most hard hitting points that Mr. Morin made was that there weren't enough entrepreneurs in the world. In essence, in fact, almost by definition, entrepreneurs are the driving force of the economy. In this day and age, I believe it has become to easy to be complacent with the system: you go to college, you graduate, you find a cookie-cutter job for a big company, you work your way up, you retire. Unfortunately, subjecting yourself to the system like that can only get you so far; the people in the world that really go far are those that invent, take risks, and create real gains for the economy. For example: Bill Gates, Mark Zuckerburg, Steve Jobs - three technology giants who have transformed the world as we know it. They didn't get where they were by joining big corporations; instead, they created their own.

So why aren't there more entrepreneurs? The easy scapegoat is risk. But why? We take on risk all the time, with investing, driving, relationships...everything! Why would the risk involved with starting a business be so high? One reason is that the fixed costs (i.e.: college) are so high. The Economist recently did a few blog posts about higher education being the next big bubble, something I have been saying for years! According to N+1, since 1978, tuition has risen 650 percentage-points above inflation. And since you really can't start a great business without at least a college education (there are a few exceptions, I'm sure), that means that there is an increasing disincentive to become an entrepreneur. The average student graduates with $20,000 in loans, making it nearly impossible to invest in a good idea. Instead, most graduates take the route of working for a big corporation and paying their dues to society.

Keeping on the Facebook theme, there is an excellent quote in The Social Network that I might have mentioned before: "Here at Harvard, we don't teach our students to find jobs, but to invent their own jobs" (paraphrased). This mentality, I feel, is the exception in higher education. Instead, universities are caught in a divide between being academic institutions versus being professional academies. This issue could drag on for pages, but the main point is clear: our colleges and universities are failing at providing the entrepreneurs that would otherwise power the economy of the future.

The Internet
Another point that Mr. Morin made was that there aren't enough internet companies. Here I have to disagree; however, he did make a strong argument. According to him, there are so many uses of the internet that haven't been taken on yet. For exampled, he mentioned a company that was scheduling reservations for restaurants without the need for expensive equipment. Apparently, it is relatively easy to get start up money from angel investors and investment banks for internet projects.

I find this surprising because I question the economic benefit from internet firms. Yes, the reservations company is making restaurants more efficient and helping allocate capital to newer developments, but that is not usually the benefit from internet firms. Facebook is the ultimate example of a company that should be worth nothing: it adds nothing to the economy. Some would make efficiency claims but I content that any added efficiency gotten from Facebook is negated by the loss of time spent on Farmville. So where is the benefit? Most social networks and internet entrepreneurial companies amount to nothing more than toys. They may be a hit now, but the economy should be focusing on real growth: physical technology, medicine, defense, etc... I'm not saying there is no benefit to social networks and the like, but definitely not billions worth.

I get the impression that somehow people have forgotten what being a value to society is. It may be possible to make good money selling your stuff on Etsy, but really that doesn't add anything. The world needs more engineers and inventors and entrepreneurs. But my advice to those is to avoid gimmicks and stick to hard capital. Invent machines and medicines, not internet toys. As a country, if we want to maintain our status, we have a lot of work to do. For me it's too late, I'm going to law school. But for those still studying as undergraduates: don't just make something of yourselves, make something of the world.
at Tuesday, May 10, 2011